The More We Are Together The Happier We Shall Be 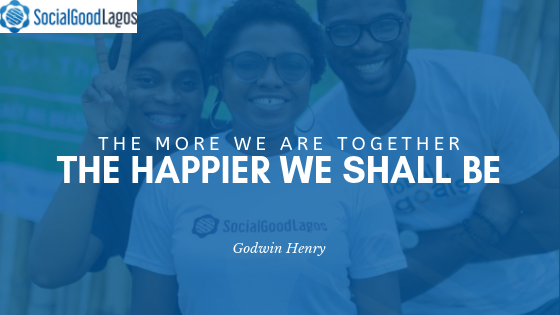 Across the globe, the search for happiness is as old as man itself and humans have deployed different means towards attaining this seemingly elusive phenomenon.

With approximately 7.7 billion people on earth, an estimated 6500 spoken languages, 4200 religions and more than 100 ethnic groups, it is believed that we live in exciting times, but contrary to this, research points that we have more people seeking happiness than any other human age. To confirm this, The Thomson Reuters Foundation Gallup 2018 Global Emotions Report revealed that world happiness levels are at their lowest level, considering the present world population in comparison with previous years. This poses a major concern coupled with the alarming increase in the rate of depression and other mental health issues, leaving a lot to ponder on in ascertaining the reason for this.

Humans have overtime celebrated and brought to the fore our perceived differences, created a divide along ethnic lines, religious ties, gender, political ideologies among others. This has fuelled gender segregation and inequality, contributed to racism, religious extremism, and intolerance, seeing people who are not like us as being different and inferior.

In his book FACTFULNESS, Hans Rosling identified one of the issues affecting development as the division of the world into two groups; Humans have a strong dramatic instinct toward binary thinking, a basic urge to divide things into two distinct groups; able vs disable, good vs bad, rich vs poor; us vs them etc. Pointing that the ‘we and them’ connotations are the biggest misconception affecting humanity. These divisions have ultimately slowed the rate of development globally, breeding social inequality and contributing to the high unhappiness rate amongst people.

Realizing that the world today has become a global village, breaking cultural and gender biases is crucial, It is, therefore, important to remind ourselves that in the past when people came together for a common cause, notable progress was achieved. For example, the war against deadly diseases like polio was only won through collaboration, smallpox was eradicated through shared effort and the Apartheid in South Africa ended as a result of uniform global uprise.

To this end, we need to understand that for the Sustainable Development Goals (SDGs) to be achieved, we all need to come together keeping aside our ethnic beliefs, religious affiliations, political ideologies, skin coloration, and all perceived differences. It is vital for WE to see beyond these dividing factors as we can only harness our maximum potentials when we work together. It, therefore, becomes pertinent that we start looking into our shared values and harness our diverse strengths by working towards giving women and girls equal opportunities as their male counterpart, eliminating racial supremacy, advancing global peace and creating a better world for all.

To achieve the above, one key concept which would create and promote a happier world is diversity and inclusion. While diversity means all the ways we differ, our visible differences such as gender, race, ethnicity and visible disabilities, it also includes our non-visible differences such as sexual orientation, social class, heritage, religion, unseen disabilities, different perspectives and thought processes, education, family status, and age. Inclusion, on the other hand, entails valuing and celebrating these differences, encouraging an environment where individuals are supported, respected, engaged, have a voice, and are able to develop skills and talents so that they can all thrive.

This concept doesn’t negate our observable differences but helps us to look beyond them. It gives us the ability to look beyond the colors of our skin, our physical advantage, our socio-economic status, and also helps us rediscover our common humanity.

One technique which equips us with the ability to appreciate humanity and increase our happiness in relation to our engagement with others is remembering that we are first humans before anything and that human life is meant to be shared.

The More We Are Together The Happier We Shall Be.

World Environment Day: The Battle of the Air