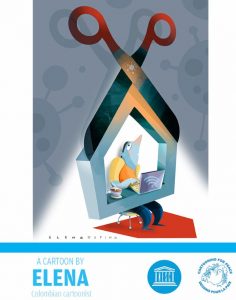 I have always been intrigued by mankind’s search for information. Maybe this is attributable to the fact that knowledge is power and information is the gateway to being knowledgeable. Essentially, information drives a lot of human activities. We can only achieve and know as much as the level of information available to us per time.

As vital as information is, it can also be used as a weapon for various means. In today’s world, information is now everywhere – at the click of a button, at your finger tip, everywhere you look and turn. Gone are those days when information was the sole privy of the privileged elite in society. New media and the internet has created an open playing field for everyone who has information to put out there.

However, despite the proliferation of news and information outlet, the media – in particular Professional Journalists are still at the fore front of the process of gathering and disseminating of information. Their role in society is crucial and is linked to the functionality of any society. The quality of information put out by Journalist shapes a country. The ability of the media to hold government accountable and report happenings says a lot about the system of governance in a given society.

It is important to note that an area of concern has always been the safety of Journalists and the media. The media and Professional Journalists have been the subjects of attacks from various governments and individuals. In different countries, there have been reports of Journalists who have gone missing without any trace, media houses being attacked, shut down by hoodlums or their license revoked by government. Despite the freedom of press and information agreed upon by the United Nations, evidence has shown that countries are enacting laws to regulate the information disseminated by Journalists.

Nigeria is not left out of this. Over the past months, there have been reports of Journalists who have gone missing as a result of their incessant reports on government and government officials. There has also been an increase in the amount of news items taken down or censored after being published.

Notably, since the outbreak of the COVID-19 pandemic, countries have adopted measures to control the reports of Journalists on the subject matter. Some countries have made it a criminal offence to publish certain reports on the pandemic. Although one can considerably say this has been necessitated by the increase in fake news and misinformation, yet, there are better ways to achieve this without gagging Journalists or imprisoning them.

Free and independent journalism is crucial in times like this. We need to ensure that Journalists and Media workers are protected and safe. This is essential as Journalism is one of the fabrics that hold society together.